Objectives: The study aims to evaluate the survival of IIM patients of different MSA patterns.


Results: Among 112 IIM patients, 79 (70.5%) were female, and the median age of onset was 55 (18-90) years old; 63.4% were dermatomyositis (DM), 17.9% polymyositis (PM) and 18.8% clinically amyotrophic DM (CADM). Co-existing interstitial lung disease (ILD) was common and found in 65 (58%) patients; 16 (14.3%) had rapidly progressive interstitial lung disease (RPILD), and 16 (14.3%) died within the observed period. Overall, the commonest cause of death was RPILD, followed by infection and malignancy. While anti-MDA5 was strongly associated with RPILD (odds ratio = 33.0 [95% CI: 7.2-151.8], p<0.001), anti-MDA5 group had the worst survival, with 1-year and 5-year survival both at 43%, compared to above 80% in all other groups (log-rank test p<0.001) ( ). There were nine patients with double positive MSA and 28 had negative MSA/MAA. Analysis between MSA sub-groups found that the double positive MSA, MAA only and other MSAs group had no mortality during study period while the negative MSA/MAA group had the second highest mortality following the anti-MDA5 group ( ). Infection and malignancy were the two major causes of death in the MSA/MAA negative group.


Conclusion: Anti-MDA5 associated RPILD was the leading cause of mortality in IIM. However, those tested negative for both MSA and MAA by current immunoblot technique also had guarded prognosis related to the risk of infection and malignancy. 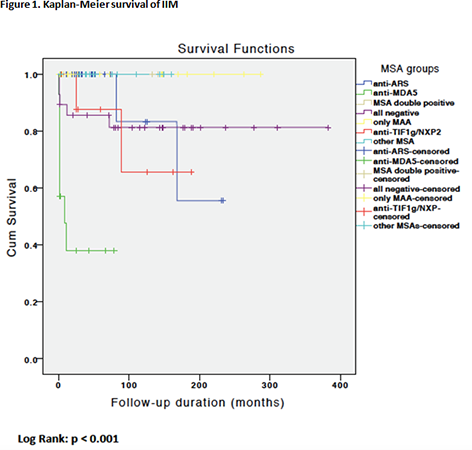 
Disclosure of Interests: None declared