Background: Treatment with the type I interferon (IFN) receptor antibody anifrolumab was associated with clinical improvements in mucocutaneous and musculoskeletal disease activity in patients with systemic lupus erythematosus (SLE) in the phase 2 MUSE trial (NCT01438489) and phase 3 TULIP trials. 1–4 Because rash and arthritis are the most common manifestations of SLE, the effect of anifrolumab on these symptoms can be examined in biomarker-defined subsets, as previously reported for the MUSE trial. 2


Objectives: To evaluate the effect of anifrolumab on rash and arthritis in patients with SLE, and the impact of IFN gene signature (IFNGS) on treatment response, using disease measures of different stringency in pooled data from the phase 3 TULIP trials.


Methods: TULIP-1 (NCT02446912) and TULIP-2 (NCT02446899) were placebo-controlled, 52-week trials of intravenous anifrolumab administered every 4 weeks in patients with moderate to severe SLE. 3,4 In this post hoc analysis, outcomes of rash and arthritis were evaluated using mucocutaneous and musculoskeletal domains of the SLE Disease Activity Index 2000 (SLEDAI-2K) and the British Isles Lupus Assessment Group (BILAG) index. In addition, the modified Cutaneous Lupus Erythematosus Disease Area and Severity Index (mCLASI) score was used to evaluate rash, and tender and swollen joint counts were used to assess arthritis.


Conclusion: In pooled data from the TULIP trials, anifrolumab treatment was associated with improvements in rash and arthritis using measures of different stringency. The SLEDAI-2K findings were largely driven by the subset of patients who were IFNGS test–high. However, using measures that were more sensitive to change, despite small sample sizes, IFNGS test–low patients may also have benefit. 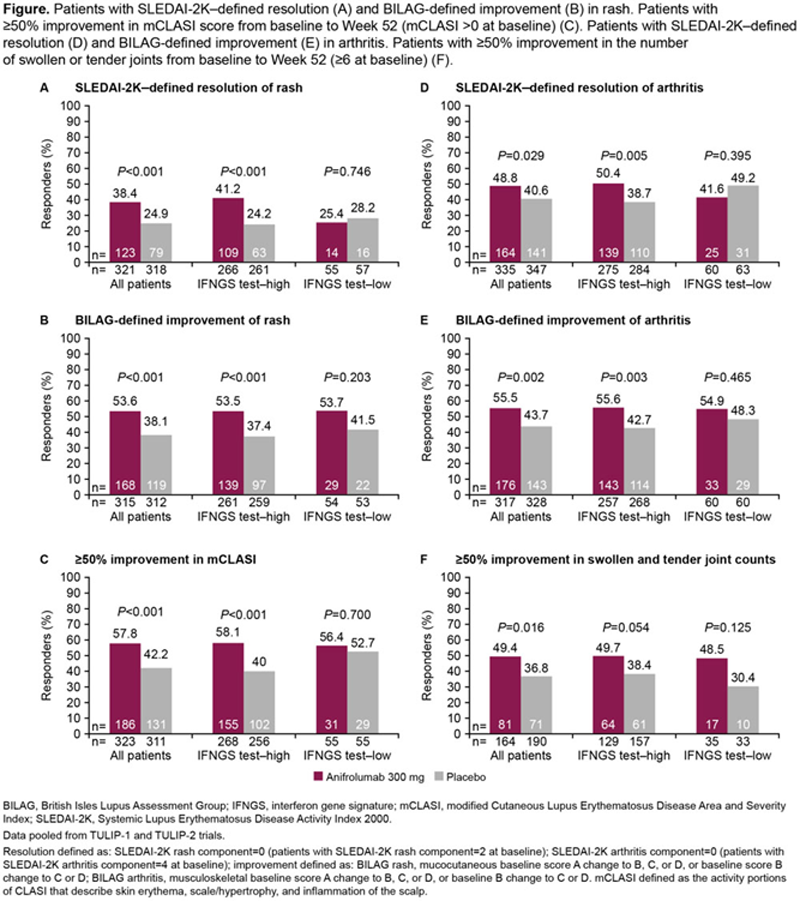