Background: B cell depletion with rituximab, an anti-CD20 mAb, has shown efficacy for systemic lupus erythematosus (SLE) in open-label studies but failed to meet primary endpoints in two randomised, placebo controlled trials. Rituximab increases BAFF levels which has been associated with subsequent lupus flares. We hypothesised that high BAFF levels after rituximab limit its effectiveness in SLE and that the anti-BAFF monoclonal antibody belimumab given immediately after rituximab could be a valuable therapeutic strategy.


Objectives: To assess the safety and obtain preliminary evidence for efficacy of belimumab following rituximab therapy in patients with SLE.


Methods: BEAT-LUPUS (Belimumab after B cell depletion in SLE) is a 52-week phase IIb, randomised, double-blind, placebo-controlled clinical trial investigating the safety and efficacy of intravenous belimumab after B cell depletion therapy (rituximab). The maximum permissible prednisolone dose throughout the trial was 20mg/day with encouragement to reduce by 50% from baseline by 6 months. The primary outcome measure was log IgG anti-dsDNA antibody serum levels at 52 weeks measured by ELISA. A linear regression ANCOVA model was fitted to evaluate the difference in 52-week anti-dsDNA levels between treatment arms adjusting for anti-dsDNA value at screening (before rituximab) and randomisation (4-8 weeks after the 1 st infusion of rituximab), CD19 > or < 0.01x10 9 /l at randomisation, and renal involvement at screen. Secondary outcomes included measures of disease activity and incidence of adverse events. B cell (CD19) counts were measured by flow cytometry. Intention to treat analysis was adopted. Full ethical and regulatory approval was obtained. A comprehensive description of the protocol and statistical analysis plan is available (1,2) .


Results: 52 patients with active SLE received rituximab (2 infusions, 2 weeks apart) and then randomised to receive either belimumab (n=26) or placebo (n=26) 4-8 weeks after their 1 st dose of rituximab. 32 patients completed trial treatment protocol (belimumab or placebo) through to 52 weeks, withdrawals were equally split between belimumab and placebo. There was a significant reduction in IgG anti-dsDNA antibody levels in patients treated with belimumab compared to placebo at 52 weeks (p<0.001, ); 43 patients were included in the intention to treat analysis at 52 weeks.

Serum IgG anti-dsDNA antibody levels (geometric means with 95% confidence intervals) in patients treated with rituximab, then randomised to belimumab or placebo at 1 st trial infusion. An intention to treat linear regression ANCOVA model was fitted to evaluate the difference in 52-week anti-dsDNA between belimumab or placebo adjusting for baseline values and stratification factors. N= patient numbers who provided serum samples at time indicated. 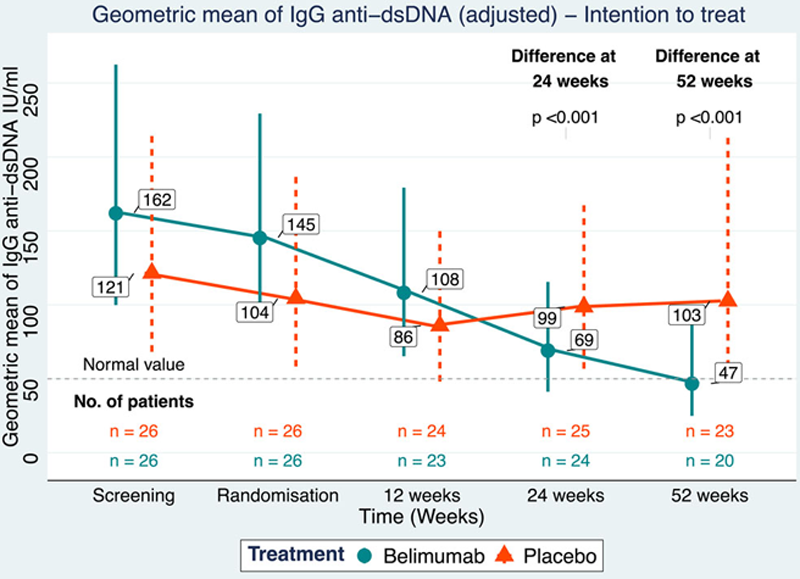 Kaplan-Meier curves demonstrated that belimumab reduced the risk of severe flare (BILAG A flare) compared to placebo (hazard ratio 0.27, 95% confidence interval 0.07-0.97, unadjusted log-rank p=0.03). There were 10 and 3 severe flares in the placebo and belimumab group respectively. There was no difference in cumulative steroid dose over the course of the trial between belimumab and placebo.


Conclusion: This placebo controlled double blind trial met its primary endpoint, a significant reduction in IgG anti-dsDNA antibody levels, and demonstrated that belimumab prolongs the time to severe flare compared to placebo. These results suggest that belimumab after rituximab is a safe and effective treatment for patients with SLE and supports further development of this combination as a novel therapeutic strategy.


Acknowledgements: We acknowledge the important contribution of the BEAT Lupus Trial Steering Committee, the Data Monitoring Committee, the BEAT-LUPUS trial investigators, and all the patients participating in the trial or involved in its development.


Funding: This trial was supported by Versus Arthritis (grant number 20873) and the UCLH Biomedical Research Centre (BRC). GSK provided belimumab free of charge, as well as additional funding.

GSK had no role in the design of this study and will not have any role during its execution, analyses, interpretation of the data, or decision to submit results. Versus Arthritis and the UCLH BRC reviewed the relevant grant proposals and monitor progress of relevant aspects of the study but did not play any role in the analyses, interpretation of data, or decision to submit results.